Visualising Systems of Trust with Simulations of Vampire Bats.

It turns out, you can’t work in Blockchain without first explaining the concept of trust.

If I asked you to visualise trust, I’ll take a punt and guess that you’re thinking of a handshake between two people. 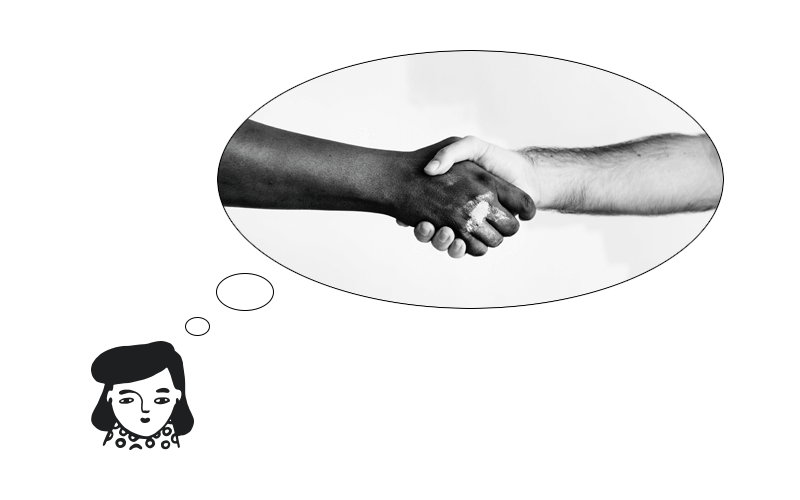 According to the internet, in the 21st century, a relevant image would be two strong males in suits shaking hands, or a silhouette pulling another silhouette up a cliff – the latter often spotted beside inspirational leadership quotes on LinkedIn.

Fear not; they wouldn’t be entirely incorrect images to see. After all, disarming one’s fighting hand has been a universal symbol of trust across the globe for centuries. Nonetheless, I couldn’t help but want to improve the internet slightly.

I wanted to visualise trust for what it really is: the invisible fabric which elevates society and enables progression.

Trust has been formally defined quite a few times, the definition usually changing based on the context of the paper it’s being referenced in. Here’s one I believe sums it up quite nicely:

The willingness of a party to be vulnerable to the actions of another party, based on the expectation that the other will perform a particular action important to the trustor, irrespective of the ability to monitor or control that other party.

Trust is all around us. When I buy a cup of coffee, I trust that the Barista isn’t going to cheat me out of the usual quality ingredients. I’m also hoping that he’s not going to slip some Polonium-210 in my cup while I briefly avert my eyes. In return, he’s trusting that I, as a customer, won’t take off without paying, steal a handful of coffee stirrers and smash up the mini cacti pots as I make my way out of the door.

It’s everywhere, and it’s connected to everything.

We each face thousands of decisions every day which require us to evaluate the probability of something happening the way we expect – and I’m not always referring to interacting physically with people.

Trust in a Digital World.

Sometimes, we don’t really have a choice but to trust the machines. We are all rather naively trusting that the government isn’t harvesting sensitive economic insights and nudes from our smartphones, and that HR isn’t reading our Slack messages. We can only hope that their goals are tied to more important activities.

It’s difficult to survive in the modern world without engaging with hundreds of these systems of trust on a daily basis. How can we stay safe with the hundreds, thousands, perhaps millions of bad actors out to pounce on our mistakes, or exploit a weakness within a particular system?

Security: the Facilitator for Trust.

Fastening a seatbelt, scoping out a profile online whom you are about to meet before an interview, or enabling two-factor authentication on your email account – these are all methods of increasing security in a system. Security is there to reassure us that entering a particular system or transaction is going to limit potential damage to us, should a participant in the system defect, or part of the system break – for whatever reason.

The real complications occur when analog systems transition into digital.

Feeling physically secure is easy to verify with our senses. However, feeling digitally secure is more difficult. It requires knowledge of protocols, familiarity with brands, pattern recognition; or to put it simply, it requires dedicated conscious brain power.

Feeling physically secure is easy to verify with our senses. However, feeling digitally secure is more difficult. It requires knowledge of protocols, familiarity with brands, pattern recognition; or to put it simply, it requires dedicated conscious brain power.

There is nothing tangible I can view, or feel, as I transfer some money I owe to a friend on my mobile. I can’t even look him in the eye to tell whether everything is above board. There’s nothing physical to provide the reassurance that my brain needs when assessing whether I’m vulnerable to danger during this transaction. I used to be able to hold a bank note up to the light, or bite a gold coin to check it’s real. Well, once. Until very recently, I wouldn’t have dared to purchase some groceries without verifying their freshness with all of my senses, in person.

Right now, I find everything just a click of a button away, on my mobile, while I travel home on the bus. There is simply no choice but for me to constantly adapt to these new systems just to be able to live in an urban environment. I can’t even pay for parking outside my flat without trusting a machine I’ve never met before.

I simply cannot rely on my senses anymore. Where the hell do I look for the security?

The term trustless if often used to claim systems implementing Blockchain technology require 0% trust, because of the what cryptography brings to the security of the system. What trustless is actually referring to, is the lack of trust that two characters in a transaction require in each other. Instead, as an improvement, they are both required to trust the system.

Whether you’re using Blockchain or not, there are a lot more factors which come into play when performing financial transactions digitally. Let’s take a look at [a simplification of] the chain of trust we must accept when transferring money online. We are trusting that the following hold true:

…and there are many more smaller methods of attack which can be used to infiltrate this chain.

Fortunately for us, we can relax knowing that the system has been tightened up in the following ways:

Security, whether it be a precaution you’re taking personally, or an inherent part of a technical system’s design, is the facilitator for trust.

Why have I chosen to talk about Vampire Bats alongside my explorations into visualising trust?

I wanted to provide a visual viewing glass on top of abstract concepts like security and trust, and I realised one important thing: trust affects behaviour. I wanted to discover the cost of deception in a system without security. I wanted to play with the premise that society depends on trust in order to progress – and boy, did I find the perfect candidate! 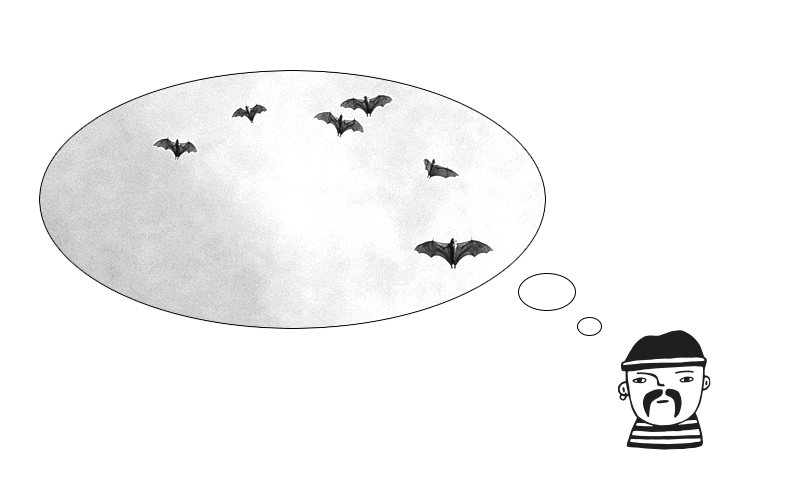 Just like most species on the planet, Desmodus rotundus (otherwise known as the Common Vampire Bat) have never lived as individuals. They have always lived in communities, and have always succeeded or failed as cooperative groups.

To help simulate how the bats behave, I’ve created a Natural System. I’ve programmed objects in a 2D space to ‘live’ as bats (white) and food (red). Bats make decisions within their small 2D environment, based upon their current desires (health), and their surroundings.

Am I hungry? Does this bat want to fly with me? – You get the idea.

No Blood ⇒ No Life.

Let’s start simple: a system with no food source will have very predictable results. The bats begin with a high health total, but will inevitably starve to death.

A simulation of vampire bats with no blood to drink. Health totals diminish and the bats eventually die with no food source to sustain them.

Vampire bats are unique in that they feed exclusively on blood. Be it a small bird, or a plump ground-dwelling cow, the little terrors will come out at night and swoop off in search of the delicious red stuff. An unlucky bat who cannot find a blood meal will starve to death in less than three days.

As we observe a single bat exploring its environment, it wonders around in search of food. Whenever the bat is within a certain proximity of a blood source, it will adjust its velocity via a steering force. As long as the bat finds food frequently, its health total will be sufficiently replenished, and it will survive for a couple of days longer.

A simulation of a single vampire bat with plenty of blood to drink.

Let’s now take a look at a system without trust. We will observe how long the colony can sustain its population when each of the bats only look out for their own interests.

A simulation of selfish vampire bats who don’t share their blood. Bats ignore the plight of their hungry friends, even if they are full.

Here’s where it gets cute: when a bat fails to find food, it will often beg another bat for donation, to see it through to the following night. After a quick “how-do-you-do?” the full-bellied bat will usually oblige.

In the system below, we can observe low health totals being replenished by nearby friends who have excess blood to share. As a result, the bats can sustain their population for a lot longer. In most cases, the systems reach an equilibrium population level, leaving us with a beautiful simulation which can run forever!

A simulation of vampire bats with blood to drink, and sharing enabled.

In the above simulation I’ve included some extra columns of statistics, showing how many occasions the bat sent and received blood. We can see that the bats with the highest health totals (at the top) could not have survived without blood donations. We can also see that these same bats have regularly offered their own blood to those in need of replenishment. The total amount of available blood in the system is exactly the same, but we can now witness just how critical it is for the bats to trust each other.

Note: I’ve only programmed bats to have opportunities to share when they are within proximity of each other. In reality, the bats can more easily meet in their cave each night they return home after a hunt for blood. Playing out this scenario I assume would further enhance the longevity of the colony in this example.

Regurgitating blood is a unique form of cooperation that ensures the whole colony is more likely to sustain its population. Over time these bats have evolved to increase the sophistication of their remarkable blood-loaning system.

Furthermore, well-fed bats are more likely to approach starving bats and initiate the food sharing. Why not build up a bank of favours after all, when times are good?

Familiarity is a prerequisite of trust, because it creates a framework and understanding of the environment and the trusted party within which the expectations of trust can be explicated.

Vampire bats do not have ledgers, or smartphones, or Developer Tools to create a System of Trust. Given a short-term lack of blood sources, it’s clear to see how untrusting or selfish bats will die pretty quickly in this system. The team cannot support players who don’t abide by the rules of the cave. Word will get around not to trust Judas after a couple of nights of unreciprocated freebies, and he will definitely find it more difficult to pass on his selfish genes after he’s starved to death.

We’ve just seen an example of a high-trust society. There is a high degree of generalised social trust, with members identifying their own well-being with that of the wider community, in spite of being unrelated.

The increase in trust has made the society safer and more productive. If these bats were more intelligent, say, like humans, they would have just earned themselves some extra time to dedicate to advancing their quality of life further, instead of just performing simple hunter-gatherer tasks.

By implementing decentralised systems of trust like Blockchain, we are not removing trust, we are simply migrating our dependence on individuals towards dependence on solid security protocols like cryptography.

Of course, Vampire Bats don’t yet rely on cryptography. They are demonstrating trust in its natural form, and by cooperating, they have learned that they can extend the longevity of their colony.

We humans sure could learn a lot from Vampire Bats. On that thought, please remember to give blood! UK US